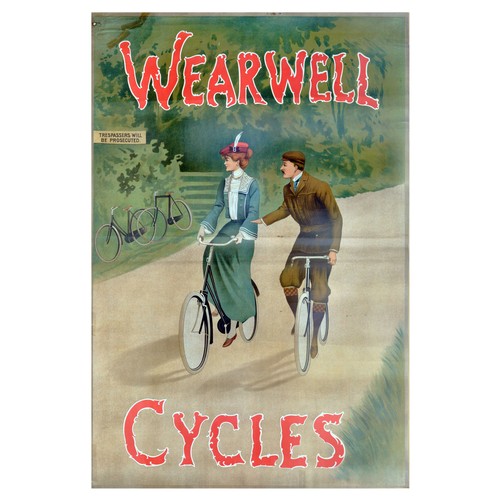 Advertising Poster Wearwell Cycles. Original antique lithograph poster for the British cycling company Wearwell Cycles (since 1867). Victorian style design featuring a fashionable lady in an elegant dress with a feathered hat riding a bicycle and a gentleman with a moustache in a smart outdoor sporting outfit riding next to her and holding her arm as they both look towards trees on the side of a country road where presumably another couple have left their bikes to do something in the woods. A stick-on sign that reads Trespassers Will Be Prosecuted was attached to the poster on the bushes and next to the steps, and the title text in bold red and white stylised lettering above and below. Great image that would appeal to any steampunk fans. The Wearwell Cycle Company was a bicycle manufacturing company founded in 1889 in Wolverhampton by the five sons of Henry Clarke, founder of the late Cogent Cycle Company. Wearwell were also motorcycle manufacturers under the Wearwell Stevens, Wolf and Wulfruna brands. The company produced motorcycles until the outbreak of World War II, from which point they manufactured only bicycles. The factory was partly destroyed by fire during an air raid but some production was soon restored. After World War II production of cycles continued and motorcycle production resumed. By the middle of the 20th Century, 75% of the company's production was exported to over 30 different countries. The company began sponsoring a professional cycle team through the 1950s, winning the Tour of Britain cycle race in 1953, which was amongst the team's best domestic racing highlights. Riders in the victorious Wearwell Cycle Company Team were Les Scales, John Pottier, Ian Greenfield, Trevor Fenwick, Ken Mitchell and John Welch. Good condition, large tear on top left margin that was repaired with tape on reverse and the glue seeped through the image, small hole on top left corner, light folds, staining near the hole and on top margin, small tears, small sign attached to the poster as mentioned in the description, edges possibly trimmed. Country of issue: UK, designer: Unknown, size (cm): 145x98, year of printing: 1900s 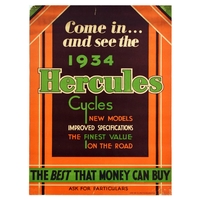 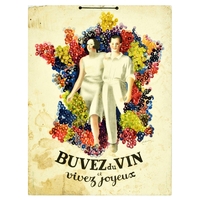